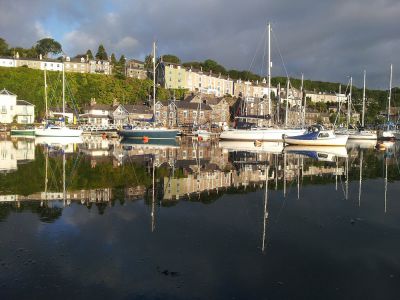 Madoc Yacht Club was built in the mid C19, probably partly as a house and the harbour office. The earliest section is probably the wing on the R-hand side, built in 1852 at the expense of David Williams of Deudraeth Castle, the upper storey of which housed a seamen's newsroom and library. By 1856 it subscribed to several newspapers and journals and had a library of 250 books. The whole building is shown on the 1871 Tremadog estate plan, 1885 harbour survey and 1888 Ordnance Survey. Is has also been used as a Chapel and a mussell Shed.

The Yacht Club has resided in the building since 1970 when it was bought from Tremadog Estate.

It was Grade II listed in 1974 because of its special social historical interest as a seamen's library, for its architectural interest as a prominent harbour-side building notable for its distinctive use of local stone and retaining definite C19 character and detail, and for its contribution to the historical integrity of Porthmadog harbour.

Below is a directory for the Club Information Section.